Being Alone Is Better With You - In North Carolina

By July 2011, I had lived in topographically challenged Florida for 6 years. At this point, I was fairly certain that I would love North Carolina as a happy medium between New Hampshire and Florida. Granted, though this kind of thinking is how I wound up in Gainesville, it was smarter to preconceive this notion with two ends of the spectrum considered, rather than one. Twenty-one years in New England with little travel experience did not an explorer make. So, what better decision than to go to the other extreme? Jeb Bush, turn up the heat! It's 2005 and here we come! Well, a thing about extremes... they get old. 90 degrees in the summer is good for one thing - pool parties. With a median age of 26 thanks to UF, I was about 3 years passé for Coors Lite kegs and the silver Tiburon.


Enter the Subaru Forester - the most practical car I have ever owned. I bought the Forester in March of 2011 because Katie and I wanted kayaks. Nothing like blowing a tax return at Bass Pro Shops for his & her kayaks.  The dashboard cup holders were necessary!

With the arrival of the Forester came the desire to go camping, but camping in Florida is nothing like what I grew up with in the White Mountain National Forest of New Hampshire. Picture pitching your tent on the beach. Now delete the ocean, and CTRL-V in a pine forest complete with saw palmettos and legions of ticks. Topographic relief is not just 3D map visualization, but also getting out of Florida and into the hills!

So, one of the more exciting things that I learned in the early part of our relationship was that Chris & Arlene Jackson, Katie's dad and step-mom, had a house in the small town of Newland, North Carolina that they rented out from time to time. Newland is the county seat of Avery County, with a population right around 700 - perfect for getting away from it all, including AT&T reception.

In August 2011, Katie and I got the chance to visit La Casa de Buck and share the cabin with it's namesake - a 3 foot tall animatronic singing deer head.


The best part of Newland is its proximity to amazing outdoor activities from rafting, biking and hiking to ziplines, gimmicky road side attractions, and of course the Blue Ridge Parkway.

The first stop that Katie and I made was actually on the drive up to the cabin, near the NC town of Brevard. Sliding Rock - a good time if you're in the area.

Within 45 minutes or less from Newland, you can reach many great hiking, swimming and tubing spots.  On this trip (the first of three vacations to the cabin) we checked out Grandfather Mountain, with the mile high swinging bridge, Loafer's Glory river tubing, Black Cat Burrito in Boone, a few interesting swimming holes, and one of the best hidden vistas we have ever come across, Wiseman's View.


Before I get into the other attractions, I'd like to point out how amazing Wiseman's View is to experience, if you can get there. From the Linville Falls parking lot Wiseman's View is about 4 miles south along Old NC Highway 105 over a rough, eroded dirt road. You'll want at least an SUV to make it up there. Once you make it up to the Wiseman's View Parking Lot, you'll take a quick stroll down a paved path to a large stone outcropping that gives a spectacular panoramic view of the Linville Gorge, the grand canyon of North Carolina. 1500 feet below you can barely hear the Linville River, and directly to the east you'll see Table Rock and Hawksbill Mountain. Of course, that is if Katie lets you go there! Wiseman's View is supposed to be one of the best vantage points for the Brown Mountain Lights - an unexplained phenomenon that occurs as mysterious red orbs, or ghost lights, in the night sky around Brown Mountain. This is just one of many places Katie has been abducted by aliens ;)
We have since gone on to visit Wiseman's View every time we're in the area. Last year was a bit foggy though!

Getting back to North Cackalacky... Boone is a small town, similar in some ways to Gainesville, but with a real Blue Ridge feel. One of the most famous restaurants in Gainesville is Satchel's Pizza, and the Boone equivalent has got to be Black Cat Burrito. Black Cat is an awesome spot that one might never come across unless they know what to look for. Thanks to some research prior to our visit, we decided this was a place we had to try. If I remember correctly, I had a Burrito of Brotherly Love (Philly Burrito) and Katie had the White Trash BBQ. 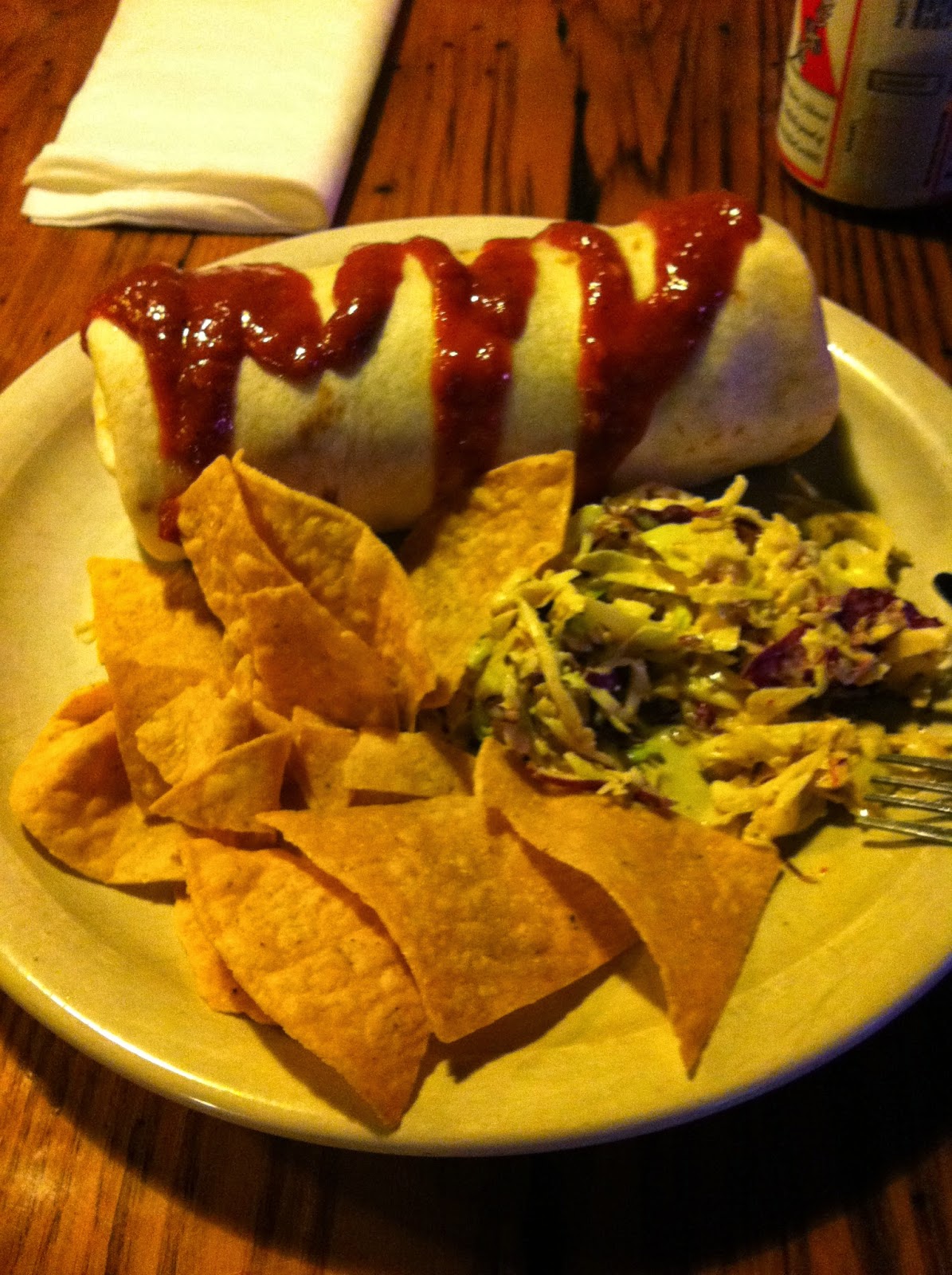 After a day at Grandfather Mountain there's nothing like a Black Cat Burrito hosed down with a cold draft beer. Speaking of Grandfather Mountain, it's a great way to spend a day. A winding auto road en route to a visitor center on the top of the mountain takes you past a small wildlife exhibit and the Forrest Gump curve, a location used to film part of the "run" montage in the film. The top of Grandfather is home to the Mile High Swinging Bridge, and some pretty awesome views of the surrounding areas.

The comedic highlight of the trip: Imagine the words spoken in the best Bruce Lee / Enter the Dragon accent, "now we know how bear take a poop!" At the Grandfather Mountain wildlife exhibit there are various enclosed habitats, including those for river otter, eagles, cougars and black bears. The bear habitat was the scene of the most excitement, not only because that was the closest Katie and I had been to these guys, but because of the people watching of course!


Of course, in between all of the exciting trips we found time to take a dip. We found the Hebron Rock Colony, miraculously, down an unmarked trail off an old dirt road. It's a great swimming spot if you want to cool off, but don't expect to do laps anywhere. I've also read that the local authorities are cracking down on parked cars that obstruct the path of travel along the dirt road. I guess it's becoming more popular these days now that the location information is more prevalent online.


Finally, Loafer's Glory Rafting & Tubing. We searched online for a place to go river tubing, and we found it! Loafer's Glory set us up with tubes to float down the Toe River. Thanks to the low water level, the river was a wide open lazy river nestled in the beautiful serenity of the hills of western North Carolina. The guys at Loafer's Glory handle the drop off and pickup of you and your tube! It was a relaxing way to spend a "Glorious" August afternoon.

Many, many thanks to Chris & Arlene for letting us stay at La Casa de Buck. The vacations in North Carolina have been a major catalyst for the upcoming road trip. Spending time in such a relaxing and quiet natural setting has an amazing positive effect on rejuvenating the soul, staving off burnout, and reawakening the spirit of exploration!  Being an explorer is better with you!