It is 9:30 p.m. and it’s still light enough to see outside.  I’m currently laying in my sleeping bag in a tent about a stone’s throw away from the shoreline of Lake Superior on the Upper Peninsula of Michigan. Katie just got the rest of her stuff from the car, parked about half a mile from our back-country site at Twelve Mile Beach.  Before we give away any more about Pictured Rocks National Lakeshore, we need to catch everyone up on the last stop.

We just spent the last week at the Lyons Family Homestead in Rindge, NH. As usual, it was relaxing, we accomplished a lot, and had a great time.  Mirabelle will be happy and loved, as she'll be hanging out there for the duration of our trip.

After giving the Forester a good cleaning – as in thoroughly removing all of the Mira-hair that MB deposited during the first 1200 miles – we unsuccessfully tried to pare down some of the junk, which somehow still takes up the same amount of room as when we had all of Mirabelle’s stuff in there. At some point I hope we figure out how to live with less stuff than this.

I posted a picture on Facebook of Doane’s Falls in Royalston, Massachusetts that I'll re-post below for all the non-FB users. We used to swim in the river and jump from the cliffs back in high school, but that's not allowed anymore as a result of too many injuries. The river was roarin’ like nothing I've ever seen there before. So, to answer any questions – it was always more calm when we used to swim there - we exercised some level of caution.


Since the Doane’s Falls hike is short, Katie and I walked one of the hiking trails around Tully Lake about a half mile downstream from the falls. We brought lunch and sat on a bench overlooking a beaver pond. There was a little park display about the lifecycle of a beaver pond – interesting to think about the land in terms of the cycles that it goes through.

While we were on the hunt for waterfalls, we allowed some reviews on AllTrails to send us to Royalston Falls, and unfortunately we let Dennis (our GPS as you may remember from previous posts) guide us. Dennis failed again, but we had a pretty crazy off road experience driving up unmaintained and washed out trails to the falls parking lot… ahh, umm – more like clearing. The Instagram video of us driving through a stream was the result of a bridge being washed out. The Forester handled it like a champion and we only slightly scraped the catalytic converter on a rock, but according to my Subaru loving family that’s where they always scrape.

One of the reasons we wanted to spend a week in the ‘Shire was so we could see everyone, and also take a trip to Portland to see a potential wedding venue. So, on Friday we drove up for a day in that sea-side city and had an amazing time; just keep reading.

After checking out the venue and finding a neat ceremony location (I’m not going to divulge too much information on this part), we stopped in for a tour of the Shipyard Brewery. It was only a video tour, but we got to sample 12 beers, so that was well worth it!  They had Sea Dog Sunfish on tap and it was delicious - highly recommended as a summer beer!!

Speaking of Sea Dog Sunfish, Katie and I are enjoying one right now. I had to put down the computer last night to get some sleep. We just finished a long hike at Pictured Rocks, so the rest of this post will be done from the comfort of a picnic table as the sun goes down.

Getting back to Portland… In addition to the Shipyard Brewery tour, we also took a longer tour at Allagash Brewing. They’re into experimenting with different strains of yeast, so that sounds like a place I could get to work once we're done exploring. Maybe someone would like to hire me as a wild yeast hunter? 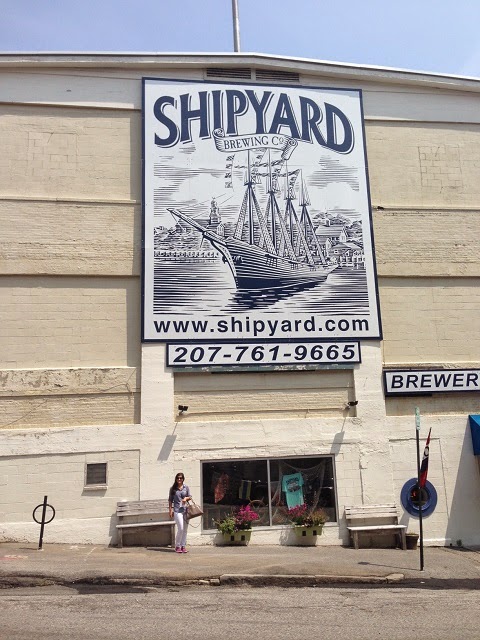 We had two pretty random and synchronous events take place while we were walking around the city. The first one happened on our way to the El Corazon taco truck and the second at 288 Fore Street. So the first one: On our walk to El Corazon we were stopped by a guy who asked what I used to shave my head. Without hesitation I replied, “HeadBlade!” The man had us wait while he ran into his apartment and returned with a HeadBlade hat. Katie and I were convinced that he was going to try to sell us something – signs of living in Florida too long. Turns out he was the brother of the inventor of the HeadBlade… how awesome is that!? He ended up giving us some awesome insight into Portland, having lived in Tampa for a number of years himself.

For the record, I have been shaving my head with HeadBlade for at least as long as Katie and I have been together. So, that's at least 4 years - and it's honestly the best for a good head shave.

The second interesting event happened at 288 Fore Street, a restaurant that was recommended to us by our friends Heather & Dennis.  Dennis’s sister works at 288 Fore Street, an upscale restaurant that typically requires reservations up to two months in advance. They also reserve 1/3 of the dining area for walk-ins – and we were second in line. As we waited in line we struck up a conversation with the couple behind us. They were really great to talk to – with many stories of great places they had visited out west, but more interesting to me perhaps, was that they hosted players in the Cape Cod summer baseball league, including one of my favorite players, Jacoby Ellsbury.

The dinner at Fore Street was as amazing as we expected, and we even got to meet Dennis’s sister. To top off the Portland experience we even drove a little further north to the L.L. Bean flagship store in Freeport. A little unnecessary, but it was fun.

The next day we caught up with Aaron, one of my good friends from back in the day. It’s always great to see him because it’s like we pick up just where we left off. It’s like that with all of my buds from high school – something that I really appreciate.

Later that same day we went to watch my brother Joey play at a concert venue with his band Lone Spirits. He’s been drumming since he was able to walk and he’s been a natural ever since he picked up a set of sticks. I think the first drum set we ever owned was for one of the other guys, but Joey picked it up and never stopped. Lone Spirits was really fun to listen to. I told Caleb and Nate (the two guitarists) that their sound should be called “green metal” since it sounded like an epic journey through nature in the style of metal. They’re still looking for a vocalist, so they’re all instrumental for now, but I’m going to post video on YouTube from that show because they were great! (I'll link it up when it's ready) I’m not just saying that because we’re related – I actually got goose bumps from how much I was into it. Music runs in the family, though, so it’s not too surprising ;) Check out my cousin’s band(s) Muckler’s Circle & Mercy White.

That just about wraps up our layover in NH – except for leaving Mirabelle behind. We had a little heart to heart before the day we left, so she knew it was coming (as much as one may believe she understands).  However, a typical Mira-sponse would be to go crazy when stuff is being packed into the car. On the morning we left she just laid on the floor next to my dad, gave us hugs and licks, and said she’d wait fur us there :)