Mount Shasta and the Lost Coast

So sorry for the delay on this post-Ben and I have been settling back into the “real world” – but we’ve gotten so many readers lately I couldn’t keep you guys hanging any longer! But enough about that what you are really here for is reading about our mighty epic road trip.  After departing Crater Lake we headed to our next stop which was Mount Shasta roughly a two-hour drive from Crater Lake. The drive is through a bunch of quiet volcanoes and more or less deserted forest. We drove past Lava Bed’s National Monument but since we had already stayed on a lava bed in Hawaii we were ok to skip that one.  We also skipped Weed, CA as the miles of billboards beforehand indicated that it was likely just a tourist trap.  On our drive down there was a pretty limited visibility because of wildfires in the area at times this huge mountain was almost completely covered by smoke from a nearby forest fire.  Ben and I had decided that we wanted to slow things down a bit and this was our opportunity, with not staying in any one place for more than one night it was a lot of packing and unpacking but not a lot of say rest and relaxation. So we decided that we would stay in Shasta at least two nights we decided that after our Deschutes River campsite that we would like to be in an actual campground instead of a dispersed site. We settled on the McBride Springs Campground on the way to the top of the mountain.

We set up camp and the campground host came over to tell us to keep at least five gallons of water nearby if we wanted to do a campfire. Ben and I were pretty blown away that we were even allowed to have a fire, but we didn’t complain – for the first time in our camping history together Ben started a roaring campfire with a lighter and a log. It was a huge change from our other adventures like here and here. Everything was so dry there we had a fire going in no time – we used that opportunity to use our Dutch oven that my Uncle Carl had loaned us to make a flatbread pizza out of crescent rolls with tomato, garlic, salami and cheese. And I’ll tell you what, from a girl who loves garlic that flatbread was crazy good! 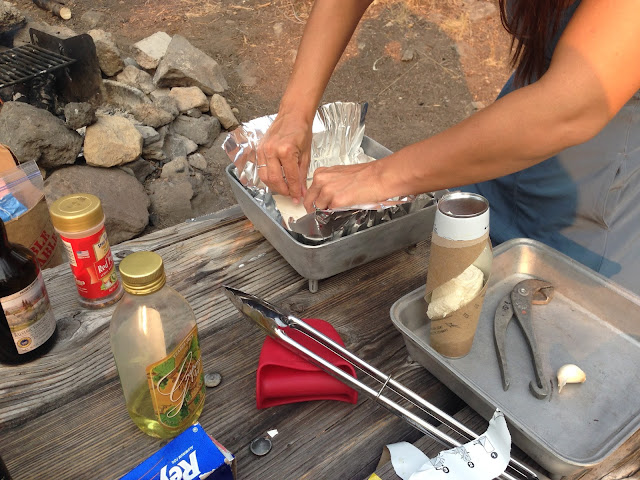 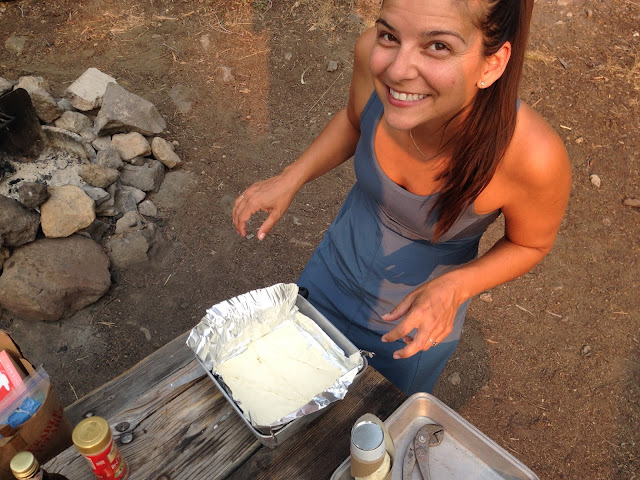 While I was making dinner a fellow camper stopped by to say hello. His name was Daniel, probably in his early sixty’s but you could tell his life had not been easy. Ben was talking to him first, talking about all kinds of things – but things you generally don’t chit-chat with strangers about. Things like God and politics but… there we were, talking about both. We talked to him for a while about what it was like in the area and all of the people whom come to be with the spirituality of the mountain.  Daniel himself did a little “woo woo” on both Ben and I and what he said to me was, “You think you’re pretty, but not that pretty. And that my dear - that is a bold faced lie.” What is so very strange about that is that those words, those very words, have run through my mind, not often, and not recently but there they were verbatim from somewhere in the way back of my head. A complete stranger just pulled them out and spoke them out loud.  It was incredibly strange he said his "woo woo" stuff was something that he has practiced over the years and has gotten better at.  I don’t remember exactly what he said about Ben but his was also factual something to the tune of he was exhausted from his past experiences.
Daniel gave us some places to check out the following day, we went to a lake nearby that still had water in it which in case you haven’t heard, there is not a lot of those left, probably even less this year than last. The smoke from the fire nearby had almost completely blocked out the sun. Daniel told us that the smoke gets better depending on which way the wind blew. Lucky for us the following day the wind had shifted and we took a lunch to a Lake Siskiyou for a little R&R. There was indeed water but like many places we visited in California the water level was down by many meters. We headed back towards the mountain and drove up a good ways to get a better look at the top.


Back at camp we decided that we should relax in the hammocks.  Ladies and gentlemen... may I present to you, my favorite pictures we took on the trip.  The wind had shifted back a bit and we were trying to keep the smoke out of eyes, but they are still one of my favorite pictures and of course Ben’s new caller ID photo.

The next day we packed up our goodies and headed to the Lost Coast to get a look at some really huge trees. Ben has a friend Evan whom he knows from middle school that moved out that way so he took us in for a few day. The Lost Coast gets its name because there is not much up there. I tried to find the name of the town where Evan lives but there are no landmarks on GoogleMaps for me to get as a reference point – heck it might not even have a name. There is also no cell service and no jiffy store that sells beer – we missed the last one and had to drive another 35 minutes before we came across any civilization. What is up there is gigantic trees and switchback roads, lots of switchbacks. Growing up in Florida doesn’t make you the best driver and certainly not the best mountain road driver so I left most of the driving up to Ben on our Lost Coast leg of the adventure. After the guys caught up for a while Evan took us to a small grove of giant trees near his house and then out for Mexican food. Evan suggested that the Humboldt Redwood State Forest was a little better than the Redwoods National Park but you know how Ben and I feel about collecting our stamps and badges. So the next day we headed north for Redwoods National Park. The most memorable part of our trip to Redwoods NP was when we stopped in the visitor center they directed us to a popular area that usually has elk at it. So when we arrive in said area, there are people pulled over (generally a sign of wildlife in a national park) but there were no elk. Zero. So we drive a little way further and stumble upon the herd of elk hanging out in front of some cabins. We enjoyed the park those trees are so massive, the wildfires in the area actually help them grow as they are resilient to the fire and kills off the other plants/competitors in the area.
That day Ben and I decided that we would opt for some “gas station tacos” via Aztec Grill and a West Coast Sunset. We drove south for a while and hit up Humboldt Redwood State Forest and Evan was right – it was just as nice, if not nicer than Redwood National Park, closer and quieter. We stopped by Tall Tree and a few other named trees in the area which were great.

One thing about being in California was there were a lot more people doing what we were doing. Traveling, enjoying, taking a little, maybe a lot of time off. We were envious of some of their set ups but I bet the people whom were just on vacation from their job were envious of us.  We drove through the forest then out to the coast what also makes the Lost Coast lost is that the land owners don’t want any development up there. They want to keep it just the way it is as cattle land how it’s been since their great grandparents settled it 150 plus years ago. It was pretty wild to see cattle grazing on the coast. It was incredibly windy there – there were times I thought that the calves were going to blow over. It reminded us a lot of Southpoint in Hawaii.

The next day we decided to head out and continue our California tour southward. We took the 101 down for a while and stumbled upon the only roadside attraction that we could agree on – the drive through tree. Unfortunately with the roof rack we were a little too tall to actually drive through ourselves but we did manage to pick up our favorite (and most well-constructed) hiking stick medallion of the trip - a pewter Bigfoot! With a lot of debate we opted to skip San Francisco until a later time when we could eat, drink and explore without so many financial restrictions. So we stopped off in Monterey for the night using our HotelTonight App (For a $25 Credit off your first booking use promo code: KJackson307) and headed down the Pacific Coast Highway the next morning.