Joshua Tree and the Beaver Moon

The Lyons were at it again, back among the National Parks.  Last April we received a Paperless Post invite to a wedding celebration for a dear friend, Sara. They had a courthouse ceremony with just their parents in September and a celebration with friends only this past weekend. They rented out a cute little inn and all of the rooms were wedding party people, which was amazing we had the whole thing to ourselves.

Joshua Tree was amazing, I wasn't sure what to expect but it was like Mars meets Dr. Suess. Huge boulders were eaten away by wind, flat lands where you can picture dinosaurs and saber-tooth tigers on. The town of Joshua Tree is a funky, up and coming town. What we could compare it to was an artsy pizza place in Gainesville, FL so if you have ever been to Satchels Pizza imagine a whole town like that. Part junk, part art, all fun. What I loved so much about Joshua Tree was that anything goes. In three square miles, you can find, a million dollar mansion, van dwellers and a guy who build a house out of pallets. Literally, anything goes and for my hippie heart, nothing makes me happier than that! 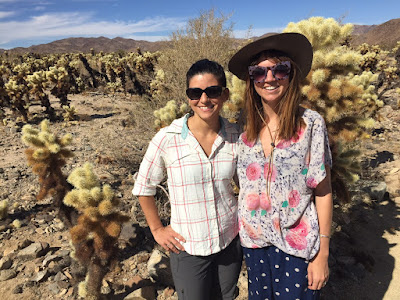 I was born in the desert so maybe it felt like a bit of a homecoming for me but man, I'd buy a second home out there in a second!

On the trip, we also made a swing to Slab City and Salvation Mountain with a brief pit stop to Bombay Beach on the Salton Sea. That was kind of like our day of destruction but it was great. Bombay Beach was a 1950's ghost town where people still lived in their 1940's trailers. I kept saying to Ben, "Thank god we have our camper cause I'd be buying on and driving it back" which I would have. There were tons of amazing vintage campers out that way. In Bombay Beach, there was *I think* an art install of missing kids on milk cartons which I loved.

Our path also took us through a border patrol station - my first time! Which is a weird experience, fo sho. I literally thought, "Am I too brown for this?" Isn't that the saddest thing? <sigh>

My friend Sara and I have been friends since middle school but her spirit is just the same as it always has been whether she is wearing Jnco Jeans and a babydoll top (1995) or a vintage turban and robe by the pool (2017). Sara is Sara, and heck she's amazing! 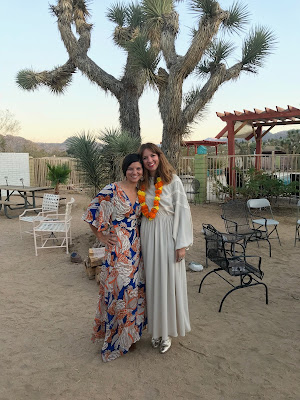 The invite specified dress code as, flowy, colorful and fun so Ben and I dug deep and went for it. We look great if I do say so myself. 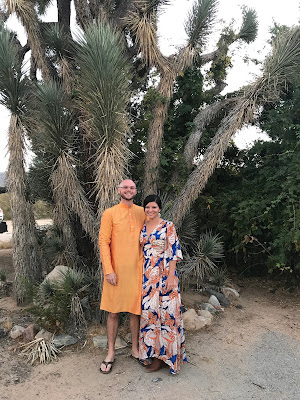 The day following the party we took a mad dash for breakfast at Crossroads Cafe and slid in a hike to the Lost Mine Trail. Sadly we were a little squeezed for time, it was windy as hell and a Demogorgon attached to my shoe and I lost the sole, so we didn't make it all the way to the mine. It did remind us how wildly brave/stupid the gold miners of the 1850's must have been. There is nothing out there, no water, no nothing - just the wild, it was great.  That same day the wedding party we went to Landers, CA a UFO town nearby where we took a sound bath with 14 singing bowls at the Integratron. A structure built with perfect acoustics. We aligned our chakra's, took a nap and let the vibrations get restored in our bodies, a great way to end the weekend. 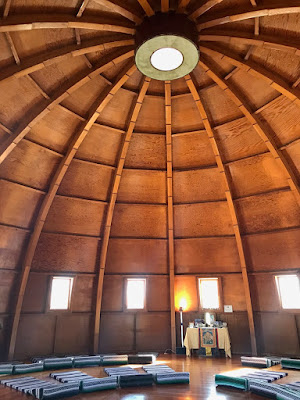 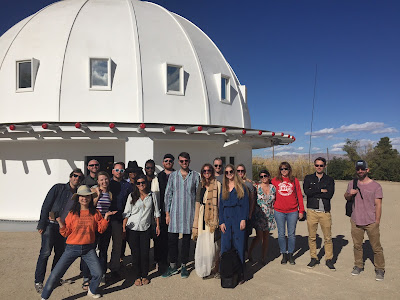 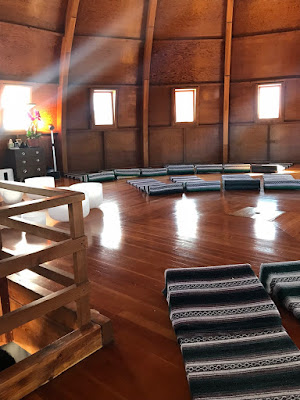 After that we heading south to meet up with some of Ben's middle school friends who lived in San Diego. That night Colby, Shirley, and their daughter Marley hosted us for  - you guessed it, TACOS. The following day we took it easy, took some chairs down to the beach and did a little grounding. We went for a lunch at Clayton's Diner and a stroll around Hotel Del Coronado. That night we had what I'm calling the very best Chinese Food I've ever had in my whole life. Those are the joys of living in a resort town.

Maybe because I ate Mexican food every day of the trip but dang it was great! So glad we could do it. Joshua Tree marks the 24th National Park I have been to, which one should we tackle next?