The next morning, in Bozeman, we decided to take the plunge and pony up for a new, smaller cooler. What sealed the deal was the guy ahead of us in the checkout line saying, "Oh man you're gonna love that cooler – we got one earlier in the summer and it's great." We took a side trip to REI, only to decide that we most certainly had everything we needed.

We headed north to Glacier National Park, the park that Ben and I were looking forward to the most. It was almost a five hour drive to the east end of Glacier - a boring drive, miles and miles of beige hills and not many other cars in site. We did however, see an awful lot of PSA's urging people to not try meth which, based on the topography, I can imagine boredom is a huge problem in that area. We passed through the Blackfoot Indian Reservation. We had decided that staying over at a southern campground would make the most sense since we would be getting into the area on the later side of the day. We pulled into Bent Creek Campground with only two sites remaining...phew.


The next morning we packed up and headed to the Rising Sun area as Many Glacier was already full by 8:00am. We picked out our site for the next two days. Our campsite was surrounded by hedges of huckleberry bushes still pretty full with berries. The campsite host let us know that the bears liked to come off the mountain and feast on the berries in the campground, but also let us know that only we could make them behave. The weather forecast looked the best for that day so we headed up to the Many Glacier area of the park. The Many Glacier area is likely the nicest part of the park. We had previously read a comment on TripAdvisor on how to get a campsite in the Many Glacier area but it involved stalking the current campers at 6:30am and slipping your registration card behind theirs if they were checked out. Since Ben and I aren't that type we skipped the crazy business altogether and just enjoyed the Many Glaciers Area without camping in that part of the park.


We had watched a few episodes of "Aerial America" on the Smithsonian Channel and wanted to check out the Many Glaciers Hotel. Back in 1915 the hotel was completed; it was one of two lodges in the park. The owner of the Great Northern Railroad Company saw an opportunity to make a pile of money by marketing Glacier Nation Park as the "Swiss Alps of America" and having travelers take his railroad, stay at his hotels, or take a stage coach to his chalets. We wanted to do something a little special at Glacier so we found out about a boat tour across the lake at Many Glacier. Unfortunately the company recommends reservations four days in advance. We put our names on the list for the waiting list and had a picnic lunch on a hill overlooking the lake and the hotel. We decided that a mid-day beer was in order and we found a log down near the lake to enjoy it at. We went to the boat dock and much to our surprise got on the boat at the time we wanted without a problem.

The boat took us across one lake then got out to hike over a hill and onto another boat and across a second lake. After that we had a guide who pointed out the berries we could eat and told us little facts about the park, then we were free to hike and explore on our own. We hiked with her on the way out then split off in hopes to make an earlier boat back to the hotel. On the way to Grinnell Lake we crossed a very questionable suspension bridge, which part of the entertainment was watching people be positively terrified of crossing the bridge. It was kinda fun and bouncy – it made us feel like pirates! The park is beautiful - the aqua water is from the glaciers melting and bringing the sediment down into the lake. We missed the early boat back but got to see an amazing storm blow in. We got off the boat just in time to snap a picture of the storm in the mountain, then sprinted back to the car before it started pouring.

The next morning we took the bus to Logan Pass - the half way point on the Going To The Sun Road that cuts across the park. We were chatting with a couple the day before while we were waiting for the boat. They said their favorite hike was the Hidden Lake Trail which has a trail head that starts from Logan Pass. We hiked up to the lake overlook but didn't go any further. On the trail we saw a whole family of mountain goats and a marmot which reminded us of Mirabelle!


After that hike we took the bus back to Sayeh Pass to hike a part of the Gunsight trail. Ben and I have a rather famous way of taking the path less traveled, and this trail was no different – we later found out it was mostly used as a horse trail. The trail was mostly overgrown and very narrow at times; peaceful and beautiful for the most part. That was until we found some bear poop and other signs of a bear scratching himself/herself on a rock and leaving a pile of fur. After that we picked up the pace. 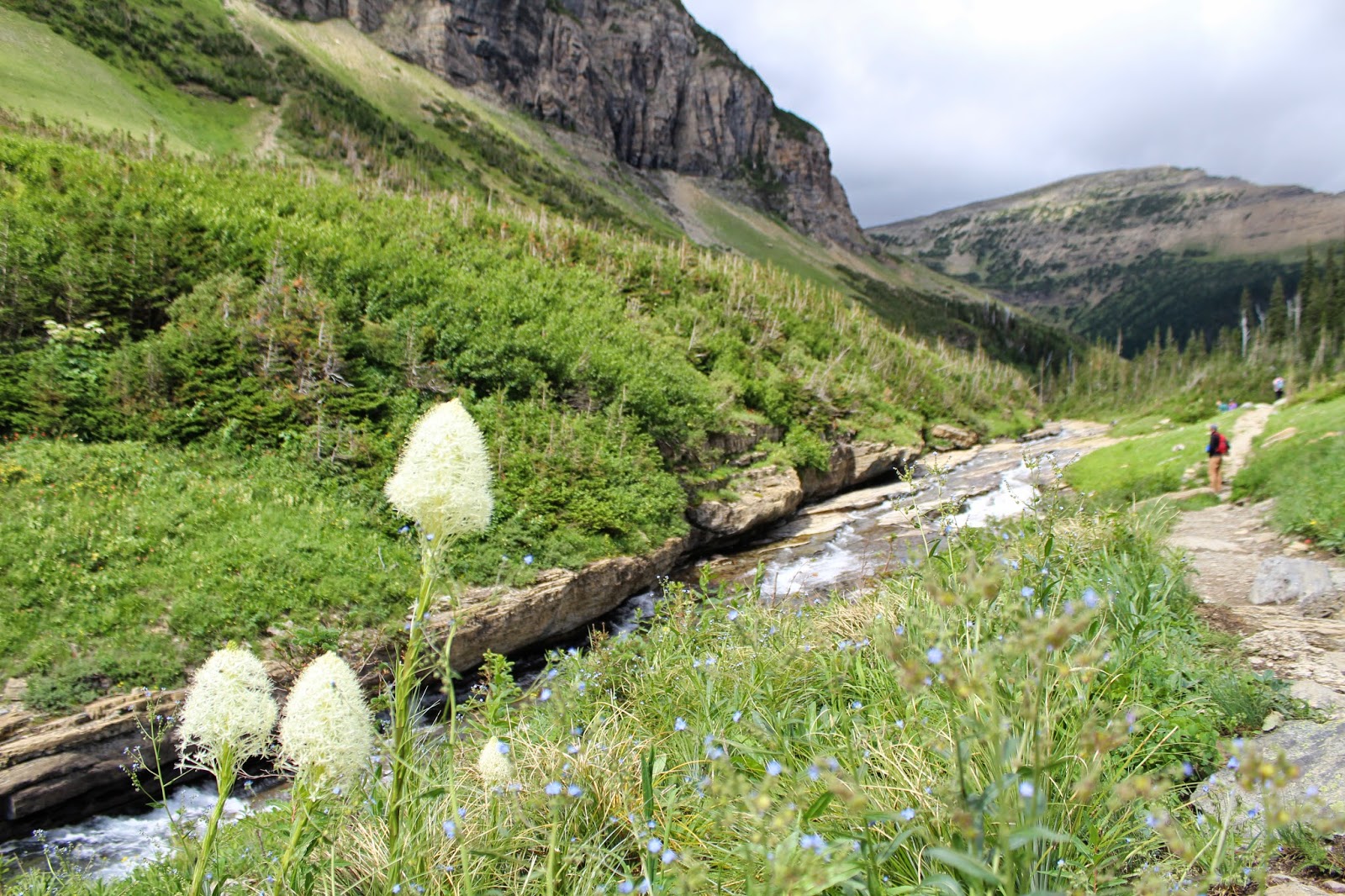 Our hike lead us right to the Jackson Glacier overlook where we picked up the bus to head down to St Mary's Falls. When we reached the falls we saw two people with a blow up kayak at the top of the falls, so we waited for a while to see if they would be brave enough to take the plunge but eventually got sick of waiting and started to head back to the bus station. We paused briefly to see a few foolish guys jump into the glacier fed river below. Burrr!


It had been raining off and on most of the day so we decided to head back to camp, had dinner and went to brush our teeth so we could come back to camp and crash after a quick trip to the visitor's center for some LTE access. Upon coming out of the bathroom area a fellow camper came running up to us and said, "Oh hey I just wanted to let you know that there was a bear with her cub just in the campground over near site #69." We thanked her and started heading back to our site….. #68. Close call but momma bear and cub headed through the campground and towards to visitors center. We stopped to see momma bear and cub hang out in the field until the park staff shot off some black powder to scare momma and cub to a less populated area of the park.

After our trip to the visitor's center we headed back to camp to get some rest. It rained most of the night and continued into the morning while we were breaking down the campsite. We tried to eat some hard boiled eggs that were past their prime, so instead we opted for some hot brewed coffee that didn't involve boiling water and some crappy Hostess donuts. Both were uncharacteristically amazing.