Not more than two months after the trip to Hawaii I had my summer vacation scheduled. Katie was able to get the time off too, so we made plans to visit a few places. Katie lived in Charleston, South Carolina for a short time after graduating from UF, so a weekend there would be the first stop. I made plans for a special occasion, and a secluded cabin in the Great Smokey Mountains of Tennessee did the trick. We also figured that while we were in the area we might as well stop into La Casa de Buck and see if anything needed our attention. Mirabelle was to spend the vacation with her Grammies since she’s been known to complicate a vacation or two.

I planned to propose to Katie on the trip, and had picked up her ring the week before we left. Now, it’s not like I went out and shopped for a ring last minute. This ring was hand crafted by our very talented friends, Heather and Dennis Chouinard.  I went off on a tangent writing the story of the ring, so I’m dedicating a separate page to it. I'll link it up when it's ready!


Getting back to the trip, our first stop was in Charleston for the weekend. We booked two nights at The Mills House, in the heart of the historic downtown. The Mills House itself is a piece of history, having gone through many changes and restorations from the early 1800s until now. It was once taken over by Robert E. Lee and his men to serve as a field headquarters in the Civil war and housed burn victims from the Great Fire of 1861. From this it is said that the ghost of a mid 1800s era woman haunts the rear lobby.

From our hotel it was a short walk south to the Battery, a defensive seawall that stretches around the peninsula. Walking back north along East Battery, Katie showed me all of the Antebellum period homes that overlook the water, one of the aspects of city that she loves.

We had dinner at Magnolias, a true Southern restaurant serving low country cuisine. To be completely honest, I wasn't that impressed. Perhaps I'm not all that sophisticated when it comes to dining, or that I'm very lucky to have Katie's amazing cooking every night. It's a decently expensive place which probably gave me high expectations, but seriously, I'll take a specialty burger and a craft beer for $20 nine times out of ten. The other one time I'll take pizza and beer.

I really enjoyed the trip we took to Fort Sumter. We walked from our hotel to the dock, which took about 30 minutes. After reading about the Hawaii trip and the Papakolea Beach walk, you should know that we're down to hoof it.

We spent a lot of time walking around, looking at cool old buildings and architecture, having drinks on roof-top bars, and relaxing in the various parks. Charleston is a beautiful little historic city, but I need some wilderness adventure in my life, so I was ready to get to Tennessee - for more reasons than one! 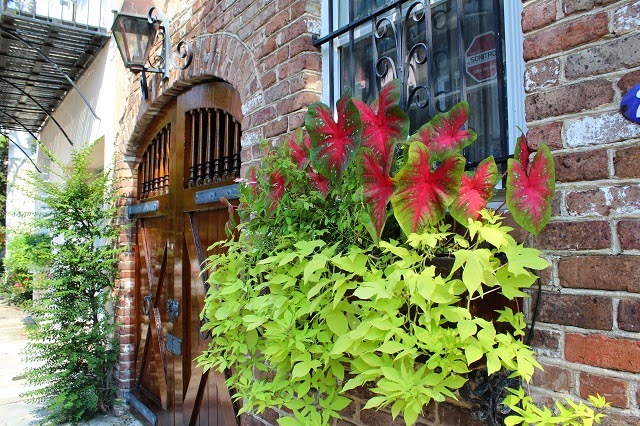