After leaving Carl and Linda's we drove north towards Lynchburg, Virginia. A minor mix up with directions on the highway later and we met up with our good friend Alex, another Subaru Forester driver, to head into Shenandoah National Park for a few days of camping and hiking.

Shenandoah National Park, part of the Blue Ridge Mountains, is home to Skyline Drive - a 100 mile scenic route with overlooks, hiking trails, campgrounds and picnic areas running from Waynesboro to Front Royal, Virginia. The roadway traverses the park over the peaks and gaps in the mountain range at elevations from 2000 to over 3000 feet. The park was created in 1935 to give the populations of D.C. and the surrounding areas a natural refuge similar to the parks out west. 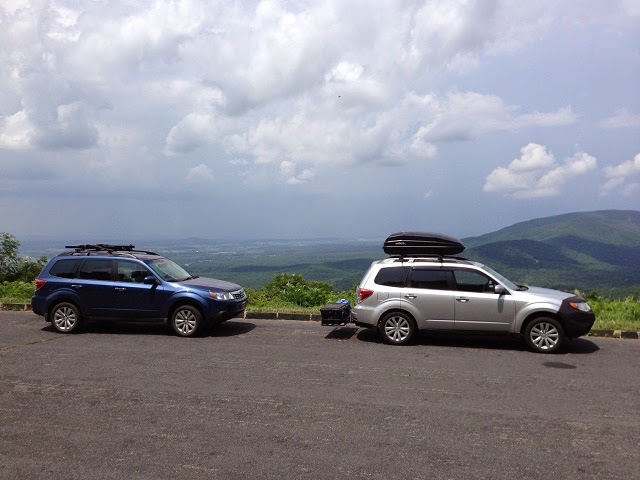 The clouds were already building as we drove up to 3000 feet and we knew that rain was in the forecast, so we decided to set up camp before it got too late. We decided earlier that we'd camp on Loft Mountain since it's the closest to the southern entrance to the park, 20 miles north of Waynesboro. There were very few people in the park since it was in the middle of the week, so we had the chance to pick out which ever site suited our needs. Since Alex was giving his camping hammock system a try, we needed a site with good trees. The park staff was very helpful in pointing us in the right direction for finding a site that would have what we wanted.

Once we got the site set up the way we wanted, it was time to get down to business...food. Alex raided the fridge and brought a bunch great food consisting of striped bass, venison sausage, hot dogs, ground beef and other necessities. While Katie wrapped up the bass in foil with sliced potatoes and zucchini, Alex and I attempted to get our park purchased firewood to actually burn. If you remember reading about our trip to Cloudland Canyon this isn't the first time I've dealt with green firewood. I totally understand minimizing the spread of invasive and destructive pests through firewood, but if a park is going to provide wood for campers they should at least provide wood that burns! So, while Alex and I boiled our wood, Katie cooked the fish on Alex's propane stove. As usual, Katie can take food and turn it into a delicious meal! Perhaps all food tastes better outdoors, but I think Katie has a knack for creating amazing campfire meals. We'll have to see how this goes...maybe a new cookbook will be on the shelves  next year!

Katie was convinced that the campground inspired the movie Bambi with how many cottontail rabbits, whitetail deer, and birds were constantly surrounding us. We even had to make an evasive maneuver on the drive into the campground as two deer jumped out into the road. Mirabelle had a handful of glimpses of the deer, and even though she told them to stay away from her humans, the deer couldn't have cared less. It most likely had no natural predators in the park. I bet if we knew the deer's name we could have called it over to the site, had a beer and perhaps talked about the weather - or whatever deer talk about. Probably about ripe berries, hallucinogenic mushrooms, and the most fun place to poop... 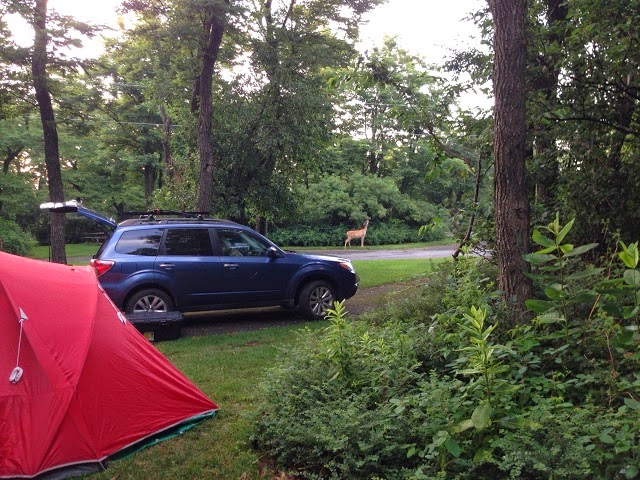 So as I said earlier, the forecast called for rain - and rain it did. Fortunately it wasn't a heavy rain, but just hard enough so that we wanted to stay inside. The tent was great - it held up overnight to some pretty gusty winds and constant rain. Mirabelle was definitely not thrilled with the situation. The rolling thunder off in the distance might as well have been on the mountain top according to her. She was shaking and panting as Katie and I tried to comfort and reassure her that she wasn't going to die. One thing I picked up on this summer is that gently rubbing my thumbs on the inside of her ears calms her down. So after doing that for 15 minutes she actually relaxed and went to sleep. It was so distinctly out of the norm for Mirabelle to be OK with thunder that Katie thought she had a heart attack and had to check for breathing to make sure she was still alive.

The other thing we had a chance to thoroughly test was our sleeping comfort on the ground. The REI Camp Beds that we have are luxurious!  3.5 inches of foam comfort combined with our fleece sleeping bags for warm temperatures and 20 degree bags for colder temperatures, or as extra padding, made sleeping under the stars pretty comfortable!

Since it rained most of the day on Thursday we took a drive to the Byrd Visitor Center near milepost 51 and Big Meadows to check out the exhibits, collect our National Park passport stamp, and of course the hiking stick medallion. 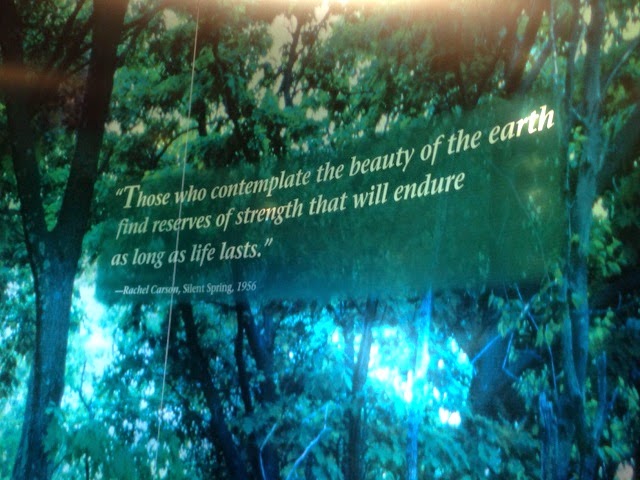 It finally started to clear up on Thursday night and the forecast for Friday looked promising, so that was the most opportune time for a hike before we left. Doyle's River trail was close to our camp site and it had a few waterfalls, so we made sure we got it in before leaving. The hike was moderately difficult, with a 1000 foot descent to the falls, followed by a 1000 foot ascent back up to the parking lot.  The 3.7 mile trail took just about two hours to complete, and the scenery was well worth it! Head over to our AllTrails.com profile from the big link on the main page to check out the track.


Shenandoah National Park was beautiful and peaceful for the two week days that we were there.  Lines of traffic were pouring in as we were leaving Friday morning, so I'd venture a guess that weekends get crowded. There's definitely more to see than we were able to in such a short time with inclement weather - but as Alex taught us - there's never bad weather, just bad clothing. So next time I would plan a longer trip, have more offline material (guide books, paper maps, etc.) due to the lack of Verizon cell signal on the south side of the park, bring more Duraflame logs to get the green firewood going, and definitely get in more hikes.

After a quick lunch at the back of the Forester we set off for the Miscoscki Crab Fest! The meandering route that we took from Front Royal to Delaware was a bit indirect, and took a lot longer than we had intended, but we arrived to cold beers, hot food, and warm smiles and that's all that really matters!